Reaching for the skies

Sublime Galleria, a sky gallery designed to ‘inspire awe’ is the versatile Uzma Irfan’s latest offering to art lovers in Bangalore.
On a late winter afternoon, the narrow bridge connecting the towers of UB City cuts a striking picture. Newly converted to host the Sublime Galleria, the breathtaking location is the latest art space in Bangalore. Its founder, Uzma Irfan, hopes to make it a platform for young, upcoming artists. 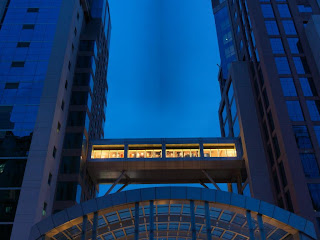 It is light and airy with generous sunlight streaming through the glass windows, the unframed art work suspended along its length. Outside, the muted hustle and bustle of city life flows on. As dusk nears, the LED lights, that cast no shadow on the artwork, come on.
“UB City has been a destination for art lovers for many years now, with dedicated events such as Art Bengaluru, which has helped put the city on the global art scene. Hence, this was a natural choice to introduce India’s first ‘Sky Galleria’, overlooking the spectacular panorama of the Garden City. It aims to be a refreshing concept, providing visitors with a unique experience of being suspended in mid-air while browsing through Fine Art,” says Irfan, who is also the Executive Director of Corporate Communications for the Prestige Group. 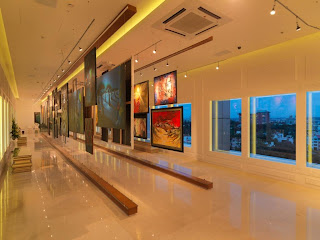 Her previous associations with art have included organising the Art Bengaluru festival. She has also handled solo art shows and aspired to do something more to promote the artists and keep them motivated. Her father, Irfan Razack, Chairman and Managing Director of Prestige Group, suggested a gallery would be just the thing.
She says, “Sublime Galleria was created with a vision to support young and upcoming artists and I believe that this has been achieved to a large extent over the last year. The new-look Sublime will cater to a wider selection of artists with their artworks being on display around the year.” 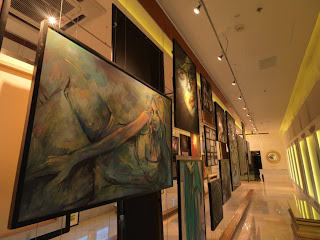 Irfan hopes that the Galleria will evolve into a space where artists and art lovers can gather to discuss art or to muse or to simply seek inspiration.
Right now, the Galleria has on board eighteen artists and photographers on a contract for three months. During this time, they will be mentored to help bring out their best.
It is an eclectic collection that greets you at the gallery, ranging over diverse art media. Farah Ahmed’s ‘Negative Aesthetics’ was a happy accident on Photoshop. Srividya GS’s choice is watercolours while Amina Shazi finds her expression in digital art. Photographer Ashish Parmar captures a pair of ants in the Chorla Ghats in ‘Macro Love’ and Manoj Masand works his magic with ‘Seed Chemistry’ and ‘Rhythmic Texture’. Another artist, Pragya Jain describes her work, “The core of my art is energy. Each of my works contains a colour story, and the story at all times is a cheerful one.”
Experimental and individualistic, every artist stands out and holds his own at the gallery. As Irfan rightly says, “At the Sublime Galleria, the artist is the hero.”
- Anuradha Prasad/ Raintree Media Features/ www.raintreemedia.com
Read the story in Goa Herald on link below:
http://74.127.61.178/herald//Details.aspx?edorsup=Main&queryed=9&querypage=9&boxid=5395578&id=2637&eddate=11/23/2011
at November 23, 2011