Of Evening Ragas and Rasas

A brief spell of fierce rain on the first night of Diwali ushered in the latest Under the Raintree event, a baithak for Hindustani classical concert. Our earlier choice of venue panned out, so did the second. So it was at our residence that Arshad Ali, from Kolkata, came to sing, with the home star Trilochan Kampli, playing the tabla.

There was a mélange of aromas in the air – of oil diyas, sandal incense, platters of food, strands of marigold, the perfumes of elegantly attired friends and connoisseurs. As the sky segued into twilight, Arshad, dressed in pristine white, drew us into musical journey. With the opening notes of a vilambit khyal in Marwah, an evening raga, his voice reached out to clutch the hearts of the audience; from there, the powerful yet pure power of his voice held on through a dhrut khyal.
Music runs in his veins; his grandfather was the legendary sarangi maestro, Ustad Shakoor Khan. Arshad has been training from the age of six when he joined the prestigious ITC Sangeet Research Academy, Kolkata as a scholar and received taleem from his maternal uncles, Ustad Mashkoor Ali Khan and Ustad Mubarak Ali Khan.


We had heard of his reputation as a child prodigy, and seen his clips on youtube. While there were never any doubts about Arshad’s masterly technique, the mellifluous nature of his voice was as welcome as a spring of cool water. Strained nerves were magically soothed, the mind free to follow the curves of the music, and soar skyward.


A half hour later, he moved on to Bihaag, a delicately nuanced raga for the night, setting the mood for his final rendition in Bhairavi. “Kab aaoge”, he sang, the poignant longing sounding true and voicing the universal need for love. Eyes that had been closed to absorb the music deeper, opened to traces of tears that had welled up and flowed unbeknownst. 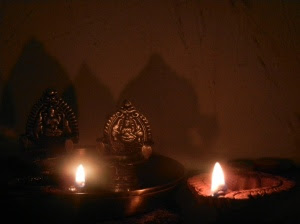 the textured scent of slowly heating oil in a clay diya


The audience was in a soporific stupor, and to gently coax them back to the gaiety of the festive night, Trilochan Kampli was urged to give us a solo performance. There were ten minutes of rousing drut teental, the unique Farukhabad gats in a sequence of increasing tempo and chakradars, to the outburst of applause that this artiste always elicits.


The bumps on the road before deciding to host the concert at home turned out to be a blessing in disguise; we had not had a house-warming after shifting into a new apartment a few weeks ago. The magic of music by the gifted young men suffused the place with peace, and the warmth of appreciative friends left us glowing.
at November 04, 2013

Email ThisBlogThis!Share to TwitterShare to FacebookShare to Pinterest
Labels: Arshad Ali, Trilochan Kampli, Under the Raintree