‘And then one day’ – we got an autographed autobiography

‘And then one day- a memoir’, the autobiography of Naseeruddin Shah is storming up the bookstores across the country. 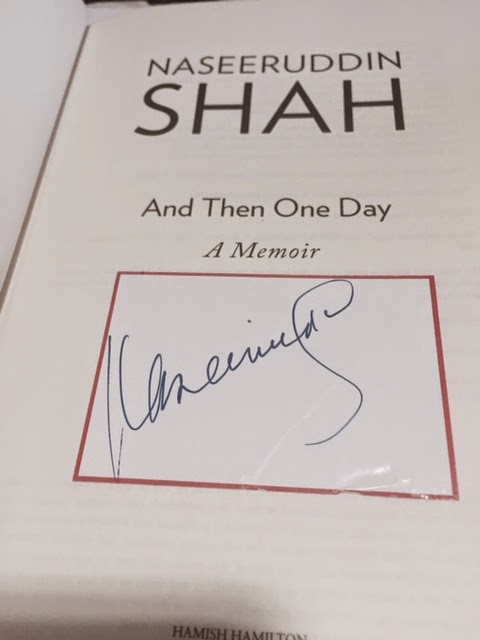 At the Bangalore launch last Saturday, Shah traced the years of his growth as an actor and a human being. “You will waste total five years to study acting?”, was his father’s remark when Shah told him about his decision to join the Film and Television Institute of India after completing his study at the National  School of Drama. The father-son had a love-hate relationship, and the book shares painful incidents of being compared with his more academically inclined brothers.

Apart from his struggles in the film industry, Shah also recounts his love for the gentleman’s game cricket, equations with co-stars such as Om Puri and the problems he had with his first wife.


“It took me many years to finally come out with my autobiography; some of its thoughts had been penned down years ago” he said.


The intelligent and quirky Shah declared his “love” for Bangalore and Kannada theatre, adding “the stage was, is and will be my first love”.

A thrilled crowd at the jam-backed Landmark bookstore had the pleasure of hearing eminent historian and writer, Ramachandra Guha who was also the moderator of the event. Guha called the autobiography as a ‘fun, in-depth and a brutally honest work’.

His actor wife Ratna Pathak Shah and son Vivaan who is an upcoming actor joined him as the audience jostled for selfies and autographs. We got an autographed book, and were amused to see that it was a ‘stick-on’.

Much Ado about Adakkam

In Malayalam, just one word is enough to tell a woman what she should or should not be doing. It’s this word that had writer/ playwright and teacher Poile Sengupta in full theatrical flow at the recent launch of her book Inga.
Inga focuses on the feudalistic, deeply patriarchal and oppressive towards women in Indian society, more specifically in Kerala and the Malayali diaspora. As a writer who loves to play with words and effectively uses colloquial slangs, Poile gave a humourous demonstration of her usage of Adakkam, the Malayalam word in a satirical manner.

Having written books for children earlier, city-based Poile Sengupta says that she felt, “that to be a complete author, one must write for adults despite the fact that writing for children is way tougher”.

Inga is her debut novel for adults, but Poile has in the past written hard-hitting plays for adults: Mangalam, ‪Body blows, A woman speaks, Vikramaditya's Throne and others, all of which have been staged to appreciative audiences. She has also penned Sliced Balls, a rip-roaring comedy on golf, married as she is to golf-addict retired bureaucrat.

With Inga, Poile enters “the crowded compartment of writers for adults” in the words of Sahitya Akademi award winner Shashi Deshpande, who released the book. While Deshpande likened the book to "a thick strong coffee", Chiranjiv Singh, retired bureaucrat and former ambassador to UNESCO, who is a popular figure in the city’s cultural circles, preferred to call it "strong liquor".

Veteran theatre artist Ashish Sen read out an enthralling poem on alphabets from the book while Lekha Naidu brought in her experience in women-centred work, in reading out the dialogues of the female characters Inga, Rapa and Aunt Kuppai from the book.
at November 04, 2014 1 comment: Links to this post