'Table by the Window' by Raghav Shreyas 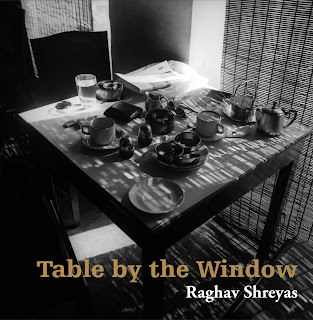 Koshy's has been the symbol of permanence in an ever-changing city, and is the icon of the true Bangalore. From eminent writers to introspective photographers; from world famous personalities to exotic mystics, Koshy's has played host to varied characters.

Raintree Media is proud to help realize a beautiful dream of a brilliant photographer - Raghav Shreyas. We are launching a photo book titled Table by the Window, in association with the Raghav Shreyas Foundation for Arts and Prem Koshy. Table by the Window is a collection of stunning photographs of the myriad characters that call Koshy's their home. With people like Girish Karnad and Ramachandra Guha captured in exquisite moments by Raghav's lens, the book is truly a collectors' piece.

Table by the Window was released by Girish Karnad at Koshy's Chill-Out on March 18, 2010.


The entire gang of Koshy's, with their usual bonhomie and camaraderie, with their quirks and their joy illuminated Koshy's Chill-Out on the rather boisterous evening of the 18th. Friends and family of Raghav Shreyas landed up to celebrate the brilliant photographer, and there was much reminiscing and recounting of funny episodes.

Girish Karnad, who launched the book, regaled the crowd with his first encounter with Mrs. Vasantha Kumari (Raghav's mother) and Prem Koshy waxed eloquently about Raghav. Mrs. Vasantha Kumari herself was ecstatic with the turn-out and found it hard to find words to express her contentment at seeing Raghav's book in its final form. Sandhya Mendonca read out the beautiful poem penned by Poile Sengupta who is also featured in the book.

The crowd even overflowed to the streets, where people sat on the sidewalk and leafed through Raghav's book. And when it was all over, it felt like one big coffee date, and the sound of laughter followed the books home to their new, proud owners.