Visit only if you respect music

I am a huge fan of Kamal Sagar’s Total Environment projects and I was keen for some time now to visit his latest creative offering: the Windmills Craftworks. I was sure it would be a spectacular place.The only problem is that it is in Whitefield, too far from town for a week night;  the place also features interesting bands on weekends. A Saturday did arrive when I was free and had amenable company.

With a little gentle persuasion, we managed to get a table ( they had closed bookings two days prior). We clambered into a cab and sallied forth.  Alighting from the lift, were very politely received and escorted to a nicely placed table; in a secluded corner right in front. (The place could do with some signage to show the floor at which the jazz theatre is located. We had to come out and ask the doorman who told us it was on the fifth floor.)

The interiors are stunning – there are wall-to-wall, floor-to-ceiling bookshelves lining the large space. The stage is spacious and obviously, no money has been stinted on the acoustics. 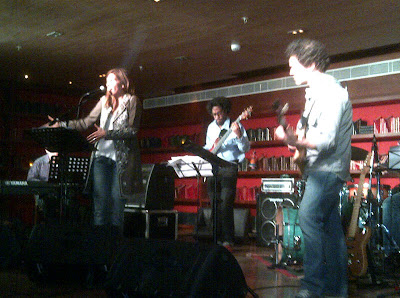 We had gone prepared to be charmed and we were. Even the experience of using the Ipad to order drinks and food was glitch-free. The band that was playing was billed as New York Jazz – a blend of Latin and Brazilian rhythms. By far, one of the best I have ever had – Magos Herrera has the sexiest voice I have heard in a woman and the musicians were flawless.

The beers brewed in-house were good; my salad was cold but so was my friend’s Kerala beef fry! We had to send it back but the tikkis and chicken breast that followed were pretty good.

We were enjoying ourselves a lot until the entry of a LOUD group of people. Turns out that they had reserved the entire first row but none of them were interested in the performance.

They chose to hang out in the small balcony that opened right behind our table and as the evening went on, the decibel level of the chatter and high-pitched shrieks of laughter were almost drowning out the music. There were sliding glass doors that were left open, because the waiters were busy refilling the drinks of the party-makers. (There was a similar terrace space at the back where diners were sitting down to dinner; they weren't so noisy. The party makers in front could be heard even here.)

After half an hour of quiet cribbing amongst ourselves about the kind of people who would choose to come to a live performance only to spend the whole evening standing outside, we told the staff our grouse. We were given a choice of moving to another table when it emptied.

My friend told the waiter that more than disturbing us, the noisy guests were being disrespectful to the performers. A short while later, we left. The spell had been broken and we didn’t feel that there was anything to be gained by staying.

A large private party ensures good revenue for the evening but how should such a party be accommodated on a performance night and intruding upon the enjoyment of other patrons? On the long ride to that place, I had repeated a story I’d heard: that Kamal Sagar is very particular about who buys his apartments because he is very quality conscious.
On the ride back, my friends asked me: ”Are you sure this is his place? How would such a particular person allow such crass behavior?”


Following the publication of the earlier piece, I heard from Kamal Sagar. Referring to that night he said that a group of 35 people had come in and had been very demanding and disruptive. The manager and staff had to deal with them diplomatically to ensure that the problems did not escalate and that the programme could continue without a major fracas. After that night, Windmills Craftworks has decided not to take up group bookings on event nights as the place is dedicated to promote good music from all over the world.

This is good news indeed for people who genuinely appreciate music. People who just want to hang out and party can find other venues.