Friday evening found us at the brand new Smokehouse Deli on 100ft road, Indiranagar. I had called ahead for a reservation; the restaurant called back to apologetically offer a table outdoors. 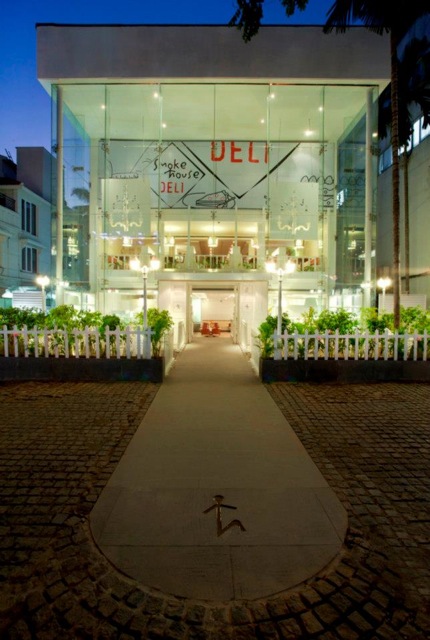 Hello, who in their right minds would choose to sit indoors in if there is an option?
When I went there though, there was not a table free on the miniscule lawn and none that showed signs of emptying any time soon.

My friends were yet to arrive so I stepped down and indoors into the brightly lit restaurant. It seemed to be blindingly white and I secretly hoped they would not palm us off there. A few minutes looking at the deli section and I was back again on the pavement; where one of the bustling staff (I learnt the next day that he was Riyaaz Amlani, the owner) offered me a drink. “I can hardly drink standing here, can I ?” I quizzed him and was told, “Oh no”, someone would escort me to the bar upstairs. (When I had called to reserve, I was told it was not yet open.)

By friends joined me by then and once again we were invited to go up and have a drink while we waited for a table. “I hope the drink’s on the house”, I said cheekily as we trooped up.
Upstairs was nice, though one my friends had to be hauled up on to the tall chair
(ha ha – that was a sight). We decided we didn’t want to move and the same gent instructed our waiter that the first round of drinks would be on the house.  The cocktails were potent, and I don’t say that only because they were free. I did order another that I paid for.

Some of the dishes on the menu were not available that evening but we were not disappointed by the taste of what we had. My tortellini was melt in the mouth delicious; my friends had steaks that they found equally good. The only grouse we had was that portions were a little small – if we had not eaten a starter or devoured the bread sticks, we would have been ravenous after dinner. And at nearly Rs.500 bucks a dish (if you add taxes), that would not have been value for money. Since we were pleasantly full by then, it didn’t bother us as much.

As we left, the owner came by to ask us if we had liked the place. We dutifully informed him of the above, and he didn’t smirk or whine, he took it as constructive criticism. Pat on the back to him and the staff. It was only the third day that they had been open and they delivered very well, considering the pressure of people.