Elegant messengers of peace and harmony

One of the virtues of the Raj Bhavan is that it hosts programmes that need an influential platform. And what better cause than that of music which soothes troubled souls?

Purani Dilli or old Delhi was for a few hours transplanted to Bangalore as against the backdrop image of the Red Fort, an elegant and gentle evening unfolded before an intimate and receptive audience. The setting was apt, at the impressive Banquet Hall of the Raj Bhavan, and we were treated to mellifluous music, poetry recitals and a dramatic narration that brought alive a by-gone era. 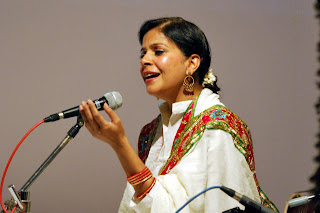 The overwhelming sentiment was of peace and harmony. “Culture is the greatest tool in building bridges and promoting understanding between communities”, says Mr. Zafar Saifullah, Trustee of the India Harmony Foundation and former Cabinet Secretary.

Today’s sad reality is that the fragile fabric of accord is increasingly being torn asunder. Voices of reason are drowned by shrill rhetoric that guarantees megabytes of news time. All the more reason then for movements like these which seek to spread their message gently, through music and dance.

“Indians, deep in their hearts, earn for the old days of social harmony” is Mr Saifullah’s belief, firmly shared by his wife, the graceful and charming Kulsoom.

The Purani Dilli show celebrates an era when culture and harmony was at its peak – the time of the last Mughal Emperor, Bahadur Shah Zafar, 1775 –1862. 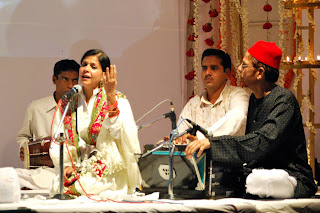 The last Mughal’s kingdom did not extend beyond the Red Fort; most of the Mughal territory was taken over by the British. Zafar set out to conquer the minds and hearts of the people through literature, poetry, music and art. The forty years of his rule saw the meeting of diverse cultures and traditions in India.

Explaining the theme, Kulsoom says, “Bahadur Shah Zafar understood the role of culture in promoting universal harmony. He was a distinguished poet and his court comprised of a galaxy of poets such as Zauq, Mir, Dagh, Momin and the redoubtable Ghalib”.

The show is a paean of praise to the philosopher – king, whose work covers a gamut of emotions ranging from romance to philosophy to pathos. With his encouragement of all forms of art and architecture, Dilli had for a few brief moments attained the pinnacle of glory celebrating the grace of the human spirit. The courteous manner of life, music and food of that era belong to all Indians of diverse faiths and regions, the Saifullahs believe and this is what the show affirms.

With a moving introduction to Urdu by Prof Urshila Chanana, the narration by Salima Raza was captivating. The soaring voice of Reni Singh moved from pathos to hope with Bangalore’s own Roshan rendering robust Qawwalis.

The abridged recreation of the full-fledged cultural show flirted at the boundaries of the elegiac, but did not sink into a lament for times past. There was nostalgia yes, as the words and music spoke about a gentler era of yore. It certainly whetted our appetite for another show that is on the cards.